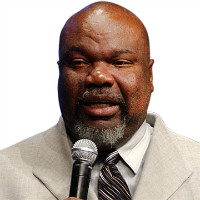 Named by TIME magazine as one of the “25 Most Influential Evangelicals in America,” Bishop Thomas Dexter (T.D.) Jakes is an entrepreneur, global advocate, philanthropist, and pastor of The Potter’s House. Located in Dallas, Texas, this multiracial, non-denominational congregation has more than 30,000 members. Known for his service to both the church and the global community, he’s led initiatives to combat domestic violence, homelessness, poverty, and AIDS. A prolific writer, Bishop Jakes has authored more than 30 books, including two New York Times best-sellers. A past and popular Summit speaker, he will close our 2010 gathering with a powerful and moving reminder of the greatness of God.