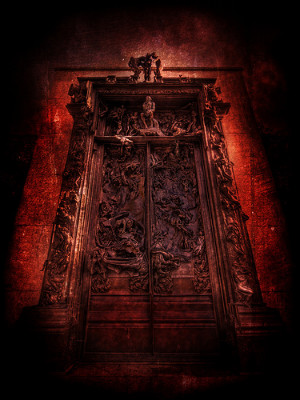 I never much cared for hell.  I suppose most other people don’t either.  So much so that a lot of people refuse to believe hell really exists.

I can understand that.

Some people call God, “Father.” They say we are all His “children.” How could any father send their children to a place of eternal punishment?  That’s one part of the Christian faith that I’ve never really been comfortable with.

I get justice. Every crime has its punishment. My kids misbehave. They call each other names, they disobey, they beat on each other from time to time. And then they get punished.

But the punishment is only temporary. They eventually apologize, I forgive them, and the relationship is restored.

My understanding has been that the Bible says we have all sinned, the consequences of sin is hell, and the only way to avoid hell is to trust in Jesus death as payment for your sin. If you die without trusting in Jesus, then BAM – you’re sent on the down escalator.  No excuses. No second chances.

That always seemed overly harsh to me. It sounds inconsistent with how the rest of the Bible describes God.  My thinking was if God “so loved the world that he gave his one and only Son” to die on our behalf, that’s a huge sacrifice, a huge gift. Why then turn around limit the impact of that sacrifice by disqualifying people who didn’t get all the terms and conditions for whatever reason.  I believed it, but I couldn’t understand it.

Then I read Notes from the Tilt-a-Whirl in which N.D. Wilson explains hell in a way that totally rocked my world…

Hell is voluntary. Do you want to go?

Wilson explains that heaven and hell is not a matter of whether you “believe in God.” When people say they “believe in God,” most mean they believe he exists.  So what?  In the end, everyone will believe in God because they’ll stand before him. The bible says even the demons believe in God.  Wilson continues…

Heaven or Hell is about love and hate. Do you love god or do you hate Him? Is He foul in your nostrils? Do you see His art and wish your arm was long enough to reach His face? Do you spit ad curse like Nietzsche? Would you trade places with the dammed thief so that you might see Him die and know that God Himself heard your challenges?

Then Hell is for you. Hell is for you because God is kind and reserves a place for those who loath Him to the end, an external exile, a joyless haven for those who would eternally add to their guilt, a place where blasphemy will be new every morning. A place less painful and less terrible than the alternative…

In the end there will be no escaping Hell, because all else will be heaven. There will be no need for chains or any kind of cell, because Hell will be that place farthest away from His smell. A place you will hate but have no desire to leave.

If those examples seem too extreme, perhaps you can relate better to a more subtle hell… the man who hates his job, but is afraid to pursue his dream job because he wouldn’t be guaranteed a steady income… the woman who cries herself to sleep, because she prefers the hell of loneliness to the risk of heart break… the countless people who cling to the hell of hatred and bitterness, rather than choosing a path of forgiveness.

When I think about it that way, choosing hell is not so far fetched.

Especially when you consider the alternative – heaven.

Heaven is not a lifetime membership to the spa. It’s not peacefully strumming a harp on a cloud. It’s being united with and living in the presence of a holy God.

That thought should either overwhelm you with joy of scare the crap out of you.

8 thoughts on “How can a loving God send people to Hell?”