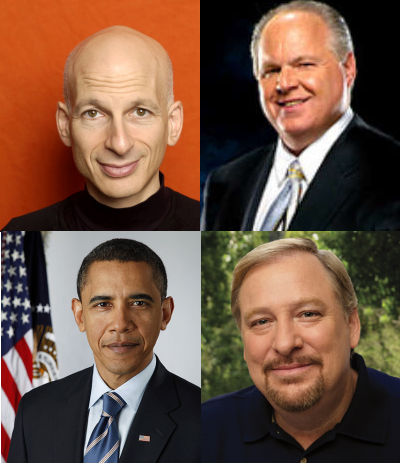 Why are these 4 so influential?  What sets them apart from their colleagues?

Seth Godin has authored 11 books that have sold millions of copies, including Tribes, The Dip, and Purple Cow.  He’s a highly sought after speaker.  His blog is ranked in the AdAge Power 150 as the #1 marketing blog out of 976 tracked.

Rush Limbaugh has had the most listened to talk radio program in the US for the last 2 decades.  He’s on the air for 15 hours a week and has a popular newsletter and website.  He’s also authored two best selling books.

Barrack Obama overcame tremendous odds to win the Democrat Party nomination for president and eventually the presidency.  He did it with a best-selling book, some of the most inspirational speeches of our generation, and the most effective Internet campaign ever.

There are almost certainly better marketers than Godin, better political analysts than Limbaugh, better government leaders than Obama, and better pastors than Warren. There are extraordinary men and women who do extraordinary work and are either content to do so quietly or lack the capacity to captivate people with their ideas.

What do Godin, Limbaugh, Obama, and Warren have in common?

They are brilliant, passionate communicators.

“Ideas that spread, win,” says Seth Godin. And the way ideas are spread is by people who love to communicate and are skilled in doing so.

Last week, I posted an article on the Christian Web Trends blog entitled  Why Willow Creek and Saddleback are Losing Influence While North Point and LifeChurch.tv are Gaining Influence which provoked some good conversation about communication and influence.  All four of the churches cited in the article have extraordinary skill and passion to communicate their ideas beyond their neighborhood.  That’s why they are changing the world (though as the title indicates, there are some differences.)

3 thoughts on “What do Seth Godin, Rush Limbaugh, Barack Obama, and Rick Warren Have in Common?”