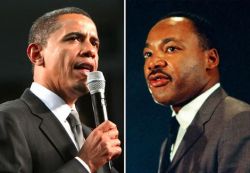 Is this a great country or what?

How did we go from a country where a black man couldn’t even go to the same restaurant as a white man to a country with a black president in 50 years?

Uniquely Diverse and Integrated
America is unique in its peaceful coexistence of multiple ethnic groups.  No country in the world has people from as many diverse ethnic backgrounds as the U.S.  Nor is any county as well integrated.  Sure, we have some racist hold outs, an occasional racially-sparked riot, and some underlying biases, but by and large we get along pretty well.  Compare that to other places in the world like Darfur, India, Russia, Israel, and Indonesia just to name a few.

Where else could a man who is a part of an ethnic minority that makes up 17% of the country be elected president?  In what other country would a person of mixed ethnicity win such broad support?

The Peaceful Transition of Power
And speaking of elections, consider how historically rare it is to see the peaceful transition of power.  Yesterday the U.S. went from being led by one of the most conservative presidents in recent memory to one of the most liberal (at least based on his senate voting record) and nobody was killed in the process.

Despite the explosion of democracy in the 20th century, only about half the countries in the world are genuine democracies.  And as we’ve seen in recent years, even in democracies the transition of power is not always peaceful.  Just look at Kenya, Zimbabwe, Nicaragua, and Macedonia.

How did we get here?
We haven’t always been this way.  And we didn’t get to where we are today by accident.  It took bold leadership by people like Dr. Martin Luther King Jr. and many others over the years.  Leadership that was principled and peaceful.  People who did not try to take through force or violence the rights and opportunities they deserved, but instead peacefully appealed to the moral principle that all people are created equal.

In many other countries ethnic groups rage against each other endlessly because the struggles are motivated largely by selfishness (getting what’s ours at all costs) and revenge.  But the U.S. civil rights movement came out of black Christian churches and was primarily motivated by the Biblical values of equality, justice, and love.   Choosing peace over violence meant enduring hardships and sacrifice – including for some of the them the sacrifice of their lives – while the country slowly came to realize rightness of their cause.

We still have a ways to go before America is truly a colorblind society, but the dramatic change in attitude over the last 40 years, the decline of overt racism, the election of Barack Obama, and the peaceful transition of power have only been possible because of the selfless moral leadership of Dr. King and others in the civil rights movement and the way we as a people have over time embraced the values they championed.

For those of us who want to better our neighborhoods, our cities, our country, and our world (whether that change is in the same direction as our new president or not), let us take the same approach – bold, peaceful, sacrificial leadership that points to the moral rightness of our cause.